The Doughnut King is the book that I chose to read for the Exhilarating Reading Adventure Project. In this project we had to make an artifact, there were a lot of different options but I chose to do the… board game!!! I decided to choose the board game because I thought I would have the most fun making it, and I also thought that I would be able to play it with my family and friends. 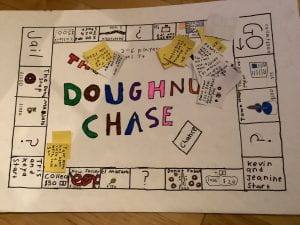 “The Doughnut Chase”, a version of Monopoly, the rules, you start on that player’s start spot, the bead is Zoe, The spaceship is Kevin, the seashell is Keya, the bottle cap is Jeanine, the big die is Josh, and the bottle cap is Tris. At the beginning of the game, each player goes to their start.

The amount of money they start with is 1five hundreds, 3 one hundreds, 5 fifties, 10 twentys, and 5 tens. To start off your turn, you roll the 8 sided die. The number that you rolled is how many spaces you move forward.

Next, we will learn about the properties, when you land on a property, you check if it is owned, if it is, you have to pay the owner of that property a certain amount of money, if it is not owned, you can either buy it, or leave it. If you own a property but you are running low on money, you can mortgage it, this means that you can sell it to the bank for about ⅔ of what you bought it for.

The turn order is Tris, Josh, Jeanine, Zoe, Kevin, and finally Keya. This is in the order of when they are introduced.

When you land on the jail space your next turn gets skipped.

When someone runs out of money they are out. Then the rest of the players continue, whoever is the last one with money wins.

How I incorporated the book into the game

If I were to do this project again, I would probably work on the blog and board at the same time instead of finishing the board and cards and then make the blog post because I feel like I could have saved a lot of time.

All in all, I think I enjoyed this project a lot, creating the board game was a great experience and I think I will enjoy playing it in the future.